skip to main | skip to sidebar

Quite a Strong Bite! 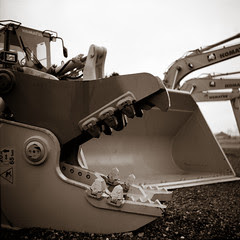 This is one of those crushers that they use to tear down buildings, which crushes concrete columns and what have you. I saw it on the way to Richmond and just had to take a picture. Alas, all I had was black and white film, which I feared wouldn't do justice at all to this field of bright, yellow equipment.

Nevertheless it was GIMP to the rescue, with a gold "duotone simulation." The delicate tone, while not replacing the bright yellow, gives a hint of color, while the even tonality overall make the teeth seem sharper somehow. Rrrhhrrr!
Posted by Bill Carson at 7:32 PM No comments:

A Tree at the End of Winter 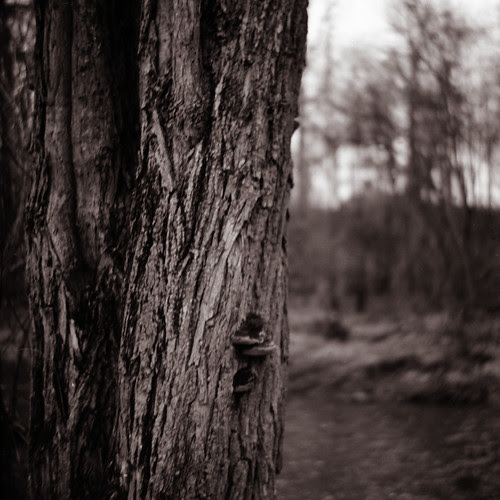 All I had in mind with this photo was to see how well the lens focuses at close range. It was a dreary, overcast day, so the aperture was wide open, creating a narrow depth of field, so my expectations were low. As you can see, I failed to focus on the mushroom; the focus seems to be closer.

However, the picture is still pleasing to the eye with a lovely texture of the tree bark, in contrast to the blur of the river and its far bank.

The reason for purchasing the Adox film was for the plastic canisters! Now I think I like it for another reason! (Also the Rodinal seems to have come through.)
Posted by Bill Carson at 7:15 PM No comments:

Some years ago Edition Olms in Switzerland reprinted Dr. Siegbert Tarrasch's Chess Magazine from the 1920's as a single volume. Tarrasch's Schachzeitung is a pleasure to read, as Dr. Tarrasch writes with a charming sense of humor.
In ages past, when time weighed heavy on my hands, I translated a few of his "Combination Exercises and Problems" into English and put them up on the web. Here they are for your pleasure.
English
Deutsch
Posted by Bill Carson at 8:37 AM No comments:

So Similar and So Different

You may observe, dear reader, a link on the right hand side of this page to a certain blog, Corrigenda Denuo, by Jeffery Meyers. Those who know me well may be a tad surprised at this because of our theological differences regarding the Federal Vision. Why the link, why this post?

I have never met nor corresponded with Rev. Meyers. I am sure he is a fine fellow, well-liked and well respected by his friends and colleagues. He has served his presbytery as moderator, so he is clearly considered capable and level-headed by his peers. My purpose is not to criticize him or to engage him in any controversy. I merely want to describe my perplexity that two men who have so much in common can have such different ideas. (Lane Keister has interacted with Rev. Meyers at his blog with more wisdom and prudence than I could muster.)

I am perplexed because we do have so much in common. We both love photography and listen to the same photography podcasts. We're both Mac-heads. Apparently he reads German, I wonder if he likes German poetry as much as I do? We read the same books, and not just theological books-- apparently we both read the same science fiction! Of course we are both officers in conservative Presbyterian denominations, Rev. Meyers in the PCA, me in the OPC. It would seem that we think alike in many ways.

Yet the Federal Vision issue shows that we think quite differently in other ways. He is for it, am against it. The relationship between ecclesiology and soteriology, the efficacy of the sacraments, views on the liturgy, are serious differences. I would argue that he is not conforming to the Westminster Standards. Rev. Meyers might say that I am misunderstanding him, the Standards, or both. Why the differences? Is it our background and outlook? No, I think it's clear our background and outlook is similar. (Both of our General Assemblies have addressed the question of the Federal Vision guys and the Standards PCA OPC.)

It has been said that we magnify the differences of those most like us. Perhaps it's because of our common investment in Reformed theology, and our hopes for the success of conservative Presbyterianism, we feel the differences most acutely. We both don't want the other to eat our lunch. Or to speak more precisely, we see the other undercutting the strengths of our movement. We would disagree as to what those strengths are, I would suspect.

I wish I had an answer. Alas, I don't. All we can do is hope for the Holy Spirit to illumine our minds from the Bible and lead us into all truth. I'm sure a little humility will go a long way in this regard.

Rev. Meyers is a great photographer, with a great eye for color and composition. The gift of seeing the final picture through the viewfinder is a precious thing. From time to time he mentions his Nikon gear, but that's superfluous. He would be a great photographer with a Brownie. To make a joke: if the ministry doesn't work out, Rev. Meyers has a great second career ahead of him.

Posted by Bill Carson at 8:57 AM No comments: 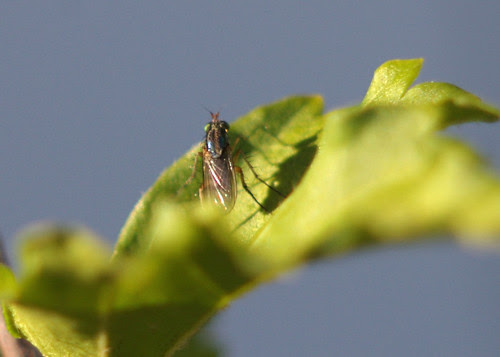 Liz's Rose of Sharon plants are blooming, and I had hoped to get a photo of one of the blooms. However, the light was not right and I started picking up the camera and tripod to go inside.

Then I noticed this little guy. Amazing, all the detail, he is quite a complex creation. He's certainly not beautiful in the same way as a flower, but he shows the wisdom of his Creator.

Taken with a Takumar 105mm lens on a Pentax k100D, using a Pentax Bellows Unit. He looks sort of jaunty, standing above his shadow like that.
Posted by Bill Carson at 7:47 PM No comments:

Art and the Familiar 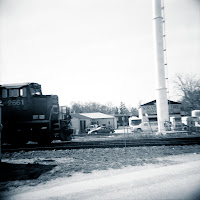 I really like this photo of the train in Strathroy, Ontario. I've driven through this crossing many times, but I've only seen the train occasionally. One day this Spring, on my way to pick up a friend who lives near the tracks, I heard the the train. At just the right moment I managed to jump out of the car and click the shutter.
Later I told my friend, "What a great photo I got of the train by your house!" He replied, "I don't want to see it! That train is always waking me up when I'm trying to sleep! I've had enough of that train."
So much for art.
Taken with a Diana+ toy camera, Neopan 400 film. Duotoned in the Gimp.
Posted by Bill Carson at 5:01 PM No comments:

Success and the Seeds of Our Own Destruction

There is nothing in the basic principles of liberalism to make it a stationary creed; there are no hard-and-fast rules fixed once and for all. The fundamental principle that in the ordering of our affairs we should make as much use as possible of the spontaneous forces of society, and resort as little as possible to coercion, is capable of an infinite variety of applications. There is, in particular, all the difference between deliberately creating a system within which competition will work as beneficially as possible and passively accepting institutions as they are. Probably nothing has done so much harm to the liberal cause as the wooden insistence of some liberals on certain rough rules of thumb, above all the principle of laissez faire. Yet, in a sense, this was necessary and unavoidable. Against the innumerable interests which could show that particular measures would confer immediate and obvious benefits on some, while the harm they caused was much more indirect and difficult to see, nothing short of some hard-and-fast rule would have been effective. And since a strong presumption in favor of industrial liberty had undoubtedly been established, the temptation to present it as a rule which knew no exceptions was too strong always to be resisted.

But, with this attitude taken by many popularizers of the liberal doctrine, it was almost inevitable that, once their position was penetrated at some points, it should soon collapse as a whole. (…)

But while the progress toward what is commonly called "positive" action was necessarily slow, and while for the immediate improvement liberalism had to rely largely on the gradual increase of wealth which freedom brought about, it had constantly to fight proposals which threatened this progress. It came to be regarded as a "negative" creed because it could offer to particular individuals little more than a share in the common progress -- a progress which came to be taken more and more for granted and was no longer recognized as the result of the policy of freedom. It might even be said that the very success of liberalism became the cause of its decline. Because of the success already achieved, man became increasingly unwilling to tolerate the evils still with him which now appeared both unbearable and unnecessary."

While I'm hardly an expert on Austrian economics, it's clear that Hayek is making a very important point. He's saying that those who are the beneficiaries of liberalism wish to follow a progressive trajectory which undercuts the freedoms which made the success possible in the first place.

It would appear here that when Hayek uses the word "liberal" he means something different than what the word means today. Perhaps his phrase, above, is a definition of what he means by liberalism: "in the ordering of our affairs we should make as much use as
possible of the spontaneous forces of society, and resort as little as possible to coercion."Alas, liberals today have no such compunctions regarding coercion as they seek to achieve their goals.

Today it seems that the boundaries of "unbearable and unnecessary" problems are being pushed in so many ways. Is there no problem too great or too small for the State to address? Listening to the promises of the politicians is a very scary exercise...

This is particularly so, because, as Hayek says, the (modern) conservative does not have a State answer for a citizen's specific problem. He can only say that if the State keeps out of the way and preserves the citizen's freedom, most people will have the most good. But people take the present good for granted, and want more. The modern liberal offers him more.

How glad we should be that the sphere of politics and economics -- the sphere of our live on this earth -- is not a self-contained, independent world unto itself. "If in Christ we have hope in this life only, we are of all people most to be pitied." 1 Corinthians 15:18 Hope, hope, in Christ we have hope!
Posted by Bill Carson at 3:42 PM No comments: 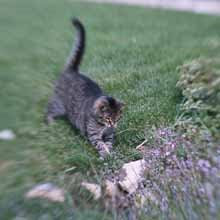 ...what's going on in my life, well, at least some of what's going on. Photography, books, theological issues. Family and friends. The Puritans. Economics. Gadgets. My wonderful Mac Mini. The title says it all...

What I've been reading lately

Some Blogs I Visit